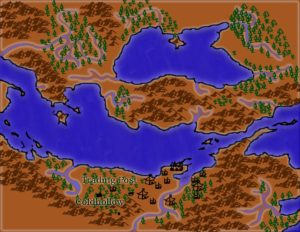 I will let its creator tell you in her own words. Introducing Kat Caffee and her fantasy world.

Alterraden is the world I’ve built for my stories to be set in.  At first, I hadn’t really considered naming it, since I expected to work with just a single world that had a few decorative Realms attached magically to it.  Then, my stories not only took on a life of their own, but the demands I had for space on my starter blog exceeded the “space” I had available.

That is how Alterraden was born.

Every book has something unique about their world, even ones set in “modern day” Earth.  However, when working with fantasy, there is more than just “something unique” to help the story stand out.  Unless the author is writing historical fantasy, they have a chance to take their readers to far off places, and to far different times.  I’m no exception.

Alterraden is a little play on words, suggested by Elizabeth Noreen Newton, one of my street team members.  (She has some fantastic books, and though she claims not to write in fantasy, had the most memorable idea offered.)  It’s a combination of what Alterraden initially was supposed to be – an “Alternative Terra Eden”.

Though my stories happen, for the most part, in a pre-human world, it wasn’t until I started having to fend off the concepts for a second series that I realized I wasn’t writing stories set on a pre-historic Earth, but an alternative Earth entirely.  Add to that the nostalgia of fairly straight forward black and white definitions between good and evil, I think you can see where the name fits so well.

I have not yet explored the entire world.  I’ve only “traveled” over a  tiny fraction of the available land in the stories written so far, which is reflected by the small map on the Alterraden website.  I’m sure, as time progresses and new stories emerge out of the wilderness of my imagination, or are patiently chiseled out of the cortex of my days story mastering various role play campaigns, I will see more and more of not only Alterraden, but also the Realms and worlds that you can reach from this central location.  That is one of the best things about the world I’ve created:  it IS a central core location for other stories and adventures to connect to.  There is so much potential, I find myself eager to explore it.

Like the world I’ve built, the website has a lot of unexplored potential.  It is the center piece of all my activities:

Alterraden has information about the places, religions, cultures, and languages relevant to all the books that will touch upon the world.  These will be a constant work in progress, though I hope an ORGANIZED work in progress as I discover new races, new cultures, and new deities during my travels in the world.  Also, as new stories are written, and new series take shape, there will be new connections created so they, too, will filter into the cumulative collection, and help make Alterraden a rich and vibrant site with plenty to explore and investigate, just like the stories I write.

Welcome to Alterraden: A Multi-Realm Composite of the Real and Imaginary!

Travel to other blogs to learn more of Alterraden and inhabitants.
Monday: The Evolution of Pukah Works from Blog to Website by Zora Marie
Tuesday: Alterraden Spotlight by Ducky’s Quill
Wednesday: Nameless Interview  by The Protagonist Speaks
Thursday: Author Interview Kat Caffee by Kristan’s Desk
Friday: Celecanepo Interview by Aaron-Michael Hall
Saturday: A guest post by Kat Caffee by Character Madness and Musings