It looks like you're new here. If you want to get involved, click one of these buttons!

::Hears the knock at the door::

Ah! I believe our guest has arrived. I’d like to introduce you to Julian, a wonderful fellow I met over on Facebook in one of the best groups I’ve come across (the SciFi Roundtable). Julian, do you mind getting things started by telling us a little about yourself?

Sure – Hi I’m Julian St Aubyn Green, and I’m an author from Australia who likes to write science fantasy novels. For a while I struggled with my genre and just said it was Spec Fiction.As for age, I’m old enough to know better, wrong side of forty, take your pick. As far as any other info, if you’re curious you can visit my website I’ll try and preserve my International man of mystery vibe


::chuckles:: I bet that provides a lot of experience to draw from when you’re writing then. Or do your stories take on a life of their own?

I’m a huge planner. Very logical, and then I start writing and the character come along and kick sand in my teeth. They want to do their own thing a lot of the time.I’m still looking for the support group for that.

If I hear of one, I promise to point you at it. It’s always interesting when the characters take off, and drag you along.

What started you on your author’s journey?

Well I worked in finance for many years, but always been a bit geeky. Dungeons and dragons and tabletop RPG’s sort of thing, but got bored playing in other people’s worlds. Along came family, and that sort of squeezed the time I had to get a group of friends around a table. So I moved online with my gaming into Play by Post games.
Anyway, working in finance I got a fairly unique view of 9/11. And on the 10 year anniversay, this idea snuck into my head and wouldn’t go away.
So I built a game out of the idea, and while the game died, the idea’s, about Freedom and Control. About hope and the choices that we make…those idea’s stuck around.
And were going to drive me insane if I didn’t write them down
Another gamer-turned-author? I keep running into those. I thought we were a rare breed.

Yup – we like stories
::Looks away innocently:: For some reason that sounds too eerily familiar.

When the stories started getting impatient, did you have one that was more demanding than the others, or did you have to “pick straws” for which one to write first?

Oh, definitely no need to pick straws. It was this story idea that grabbed me by the brain and wouldn’t let go. I’ve tried to write a number of times in my life. I guess what I really needed was just a really gripping story. Of course Ideas still happen as a story evolves
True that! Do you ever find it hard not to get lured down another rabbit hole while you’re working on one of your projects, or are you one of the lucky ones that can work on several at once?

I do lot’s of projects, but I like to vary them so they stay fresh. So right now it’s gardening, learning about PR and marketing, A couple of arty type things as I’m going to conventions. As for writing, I tend to stay working on the word mountain. I looked at the number of words when I started this story and I’m thinking it will be half a million when I’m finished.So No, I tend to stay focused and not get distracted.
Do you ever feel overwhelmed at the size of the project you’re working on?

Nope. Planner remember? One foot in front of the other until all the steps are taken. Besides…it’s fun. We always do fun stuff, and if I’m having fun, hopefully the readers will too.
::Chuckles:: I can’t dispute that. Without the element of fun, things seem to turn into text books.

Do you ever include any of your experiences in your books?

Um…kind of. I was a weird nerd when I was younger, I also liked doing adrenaline type things. So some of the things in the books I bring my own experiences in. But mostly it’s about characters and how they interact. That’s people, and as an author, I’m a people watcher.
Have you ever included scenarios in your work that have been fictionalized from observations in real life?

Well, I find flawed characters interesting. So some of the characters have my flaws, O.O, and some of them have flaws from…other people, but it’s about how those flaws interact…particularly when set against a backdrop of stress and conflict. But I don’t really base my scenes on real interactions, most of them are too fantastic.
Makes perfect sense. Not to mention, authors put their characters through scenarios that aren’t quite legal in many cases.

Do you have any authors that have helped influence what you write, or the way you put your books together?

I have a large well loved bookcase full of them. Yes I am a purist, I love the smell, weight and feel of a book in my hands. I could take you a picture, but you’d immediately notice the Pratchett Expanse, the Jordan Byway, The Martin Alcove, The Gemmel Lane, The Eddings Avenue, The Heinlein Nook, The Lackey Overpass, The Feist- Lynch- Riley- Rothfuss Conglomeration.
Hmm, sounds like I need to come take up residence for a bit. Many of those are old friends of mine as well.

Going back to your comment about being a planner, do you feel that has helped develop you develop a unique writing style?

Author voice is one of those things that happen with practice and revision. I’ve been told I have a very easy style, and the planning I think certainly helps with that.
I’m a panster, so no comment from my particular pea nut gallery. It does lead to the next question, however. Do you have a snippet or teaser you can share?

Where do you hide out on the interwebs, so I can stalk… erm… follow you and discover more about your work?

[My profile is over here.]
[And don't forget Twitter]

And the last question…

Do you have anything published? 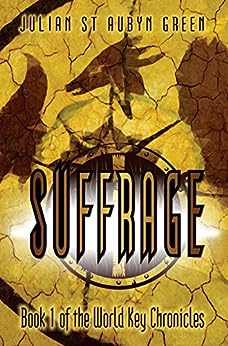 Suffrage: The World Keys
A group of rebels travel across realities to steal something precious. What would you do to take control of your destiny?

There is something hidden on Earth. A secret so immense it’s worth killing for. In a race against time, five travelers arrive, hunting a key that will change the balance of power in their world.

Jay’s birth father is a monster. He destroyed half her world and established a twisted version of utopia from the ashes, ruled by the Five Monarchs. But his blood flows in her veins, giving her power beyond any human. She has to prove that she’s not him; that she’s better. With the help of her teammates, she has to stop him from destroying her adoptive family and her world by finding the one thing that can make her his equal. But will the world key make her a monster, too?

Dr Stanford Ellis, an American scientist, is tasked with understanding these travelers. What does their arrival mean, for his country and the world? He must unravel the mystery before it’s too late.

Little do the travelers know, they were followed to our Earth. The Walker King has come seeking the rebels, and will let nothing stand in the way of his revenge. Freedom comes at a price.

Thanks. Definitely be checking this out in a bit.

Julian, thanks for stopping by today. It’s been great getting to know you a bit better.
Sign In or Register to comment.
Powered by Vanilla Forums and using the Basic Dark theme by Luciano Fiore
top